– Expertise In A Range Of Claims

This is our guide on claiming compensation for injuries sustained in a lorry accident. Over the course of this article, we will give you information regarding how to claim if a lorry accident has caused you to be injured and if you could be eligible to claim. 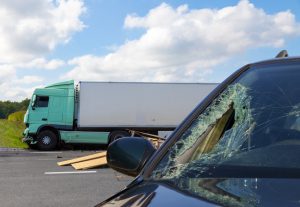 A guide to claiming after a lorry accident

The process of making a road traffic accident claim can seem daunting at first, but we are here to help. Our advisors are standing by to answer any questions you may have on the subject.

The value of claims can vary between cases. However, you may be able to claim through an online government portal called the Whiplash Reform Programme if your injuries are valued at £5,000 or lower. However, you can only claim this way if you:

If you do not meet all of these criteria, you may not be eligible to claim through the Reform Programme. You will have to take more traditional routes. You can do this by getting in touch with us. We have a panel of expert solicitors who have made many road traffic accident claims in the past.

We may be able to connect you with one to assist you in claiming for your injuries sustained in a lorry accident that wasn’t your fault.

Get in touch to get started. Our advice is free of charge. You are under no obligation to start a claim just for getting in touch. Read on for more.

Recent changes to The Highway Code mean that vehicles that can cause the most harm in an accident are also those that have the most responsibility to reduce any risk they pose to more vulnerable road users.

The presence of a duty of care is just one factor when it comes to whether or not you could claim for injuries sustained in a lorry accident. This duty of care also needs to have been breached. For example, a lorry may not have allowed a pedestrian to cross at a junction. This could be a breach of the duty of care the lorry driver owed to the pedestrian.

Additionally, injuries must have been sustained as a direct result of the breach of the duty of care. If there are no injuries, you cannot make a claim.

It’s also possible that you are partially to blame for your injuries. If so, you could still receive compensation. However, this would be reduced to reflect your part in the accident.

When Could You Make Lorry Accident Claims?

A lorry accident can be described as an accident involving a lorry or HGV and another road user. The other road user could be a pedestrian, cyclist, motorcyclist, car or even another lorry.

A lorry driver could be the one who was to blame for the accident taking place, or the accident may have occurred due to the actions of another road user entirely.

If a lorry driver is injured due to a car rear-ending them through negligence, then the lorry driver could still be eligible to claim a claim against the driver of the car. Inversely, if a lorry does not slow down in time because the driver is distracted and crashes into a car or other road user then they could have a claim made against them.

Alternatively, the cause of the accident could be poor road conditions. For example, there may be potholes or other damage. It is the responsibility of the local authority to maintain the roads for which they are responsible. This is stated in the Highways Act 1980.

An example of a local authority could be a body such as the local council. If they are aware of potholes in their roads then they have a legal obligation to make sure that they are repaired. Otherwise, they could cause certain vehicles to lose control on the road. Not carrying out these repairs is an example of a local authority breaching their duty of care towards road users.

If you are unsure as to whether or not what caused your lorry accident could constitute negligent behaviour, get in touch with our advisors today.

Figures for reported road accidents including vehicles and casualties can be found on the government website. As you can see from the graph below, there were a total of 3,399 reported accidents of varying severity that involved HGVs in 2020.

Over this period, fatal accidents were the most common of the three categories. There were 209.

Slight accidents were the most common over this period. This could be injuries such as whiplash or bruising. 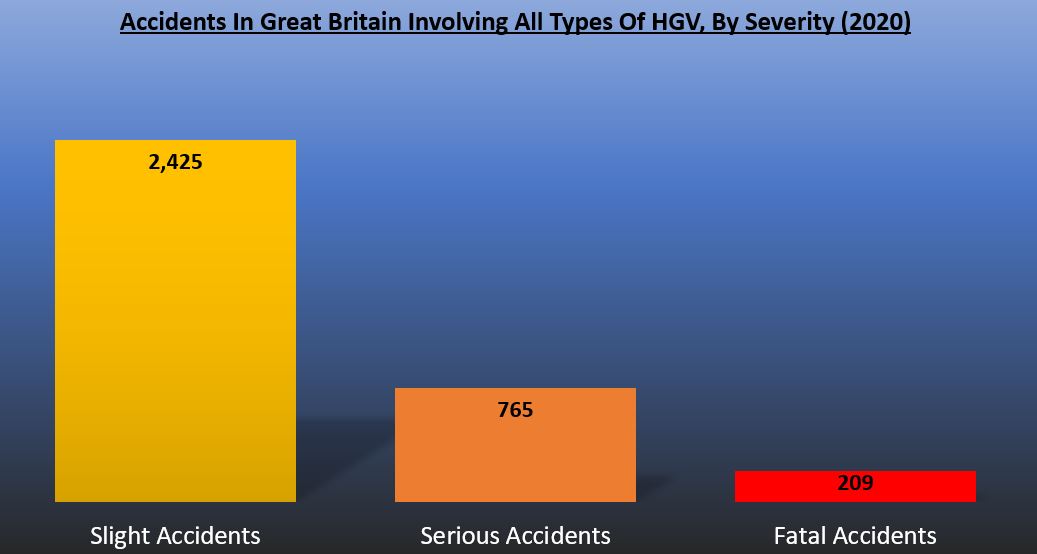 If you have been injured in a lorry accident, then your life could be affected for some time. In extreme cases, it may never return to how it was prior to the incident. In other words, the damage could be permanent. If your injuries were caused by the negligence of another road user, then you could seek financial compensation to acknowledge this hardship.

Aside from the sum that you are awarded for your injuries (general damages), you could also be awarded another figure that’s calculated to reimburse you for expenses incurred due to your injuries too; for example, a loss of earnings due to being unable to work. Additionally, you may have certain medical costs to cover such as prescriptions.

This compensation would be known as special damages. You will need to gather evidence to prove that these costs took place. Receipts and payslips can act well as evidence.

We have another article that focuses on the topic of calculating special damages.

How Much Could You Claim?

General damages can make up part of the compensation in a road traffic accident claim. It is awarded for the mental and physical injuries you suffer because of the accident. A publication called the Judicial College Guidelines (JCG) is used by legal professionals to assist them with arriving at an appropriate settlement for your injuries.

Within the JCG is a detailed list of possible injuries that may be sustained in an incident such as a lorry accident. There is a range of potential compensation brackets alongside the description of each injury.

We’ve put together a compensation table below made up of a few example entries so you can have a better understanding.

As part of the claims process, you’d attend a medical assessment. Your solicitor could arrange this for you. During an assessment, an independent healthcare professional checks your injuries and any medical records. They’ll then produce a report that includes an assessment of:

If the report finds that you weren’t injured because of the accident, or your injuries weren’t exacerbated by it, you could find it difficult to claim. However, if that’s not the case, the report can act as useful evidence as well as a tool for your solicitor to value your injuries.

For a free estimate of what you could claim, why not contact our advisors?

It’s possible to make a lorry accident claim with the help of a solicitor under a Conditional Fee Agreement (CFA). This kind of arrangement can also be referred to as a No Win No Fee agreement. This is a way of covering the cost of hiring a legal professional should you choose to do so.

All of the solicitors on our panel work on a No Win No Fee basis. This can reduce the financial risk to yourself.

What it means is that if your No Win No Fee claim is not successful, you are not required to cover your lawyer’s costs. Should you be awarded compensation, then your lawyer’s fee is then covered by them taking a small percentage of your settlement. You will be made aware of this in advance, and the percentage is capped by law. There are no additional hidden charges either.

Get in touch today to see if you could make a No Win No Fee lorry accident claim.

Read More On This Topic

Find out more about appointing a litigation friend to claim on your behalf.

You have a right to request CCTV footage of yourself, and it can be useful evidence.

Read the NHS guide on Whiplash.

Read about your rights as a car accident victim.

Our guide on making a fatal accident claim.

Thank you for reading our guide on lorry accident claims.