What exactly is hit and run compensation and how could you claim it after being injured? A hit and run incident can affect other motorists, pedestrians, cyclists, scooter riders, motorbikes or horse riders on UK roads. If the motorist in question fails to stop, it still may be possible to make a personal injury claim if you are not at fault for the incident. 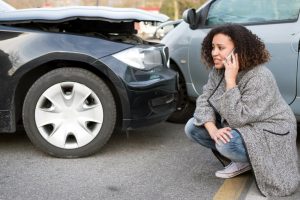 After an accident like this, it may seem unlikely that there could be any chance of receiving damages if the driver who collided with you failed to stop or was never traced. This article will explain how you can seek compensation through the Motor Insurer’s Bureau (MIB).

You may have heard about the new Whiplash Reform Program which came into effect in May 2021 and have concerns over the way your injury claim might be handled now? Throughout this guide we will explain who may be exempt from the New Claims Portal set up in collaboration by the MIB and the Government.

Learn more about your claim by:

What Is A Hit And Run Or Failure To Stop Accident?

Hit and run accidents describe a collision with a pedestrian or another road user in which the driver fails to stop or exchange details. Under section 170 of the Road Traffic Act 1988, subsection (2) states that personal injury caused to others requires the driver to stop, and under reasonable grounds provide their name, address and identification marks of their vehicle (or the details of the car owner if different).

If there is a reason that the driver does not give their name and address, under subsection 3 they must report the accident to the police within a 24 hour period. Failure to comply with subsection 2 or 3 means the driver is guilty of an offence. The Sentencing Council have a category ranging from 1 – 3 in seriousness for ‘failure to stop’ offences that can result in that driver receiving 5 – 6 points all the way up to disqualification or even custody.

Why Do Drivers Fail To Stop At The Scene Of Accidents?

In a report written for the Motor Insurer’s Bureau, several motivations were identified for drivers leaving the scene after an accident.

Steps To Take After A Hit And Run Accident

After a hit and run incident, there are some practical steps that you can take:

What Happens In A Hit And Run Compensation Claim?

The Motor Insurer’s Bureau (MIB) pays compensation in non-fault cases where compulsory motor insurance should have been in place. This means the MIB could award compensation for death, injury or property damage to the non-fault party of a hit and run accident.

In hit and run cases, there may not be any way of ever finding out who the driver was or having a chance at seeking compensation from them. It is important to point out though, just because a driver has left the scene of an accident without exchanging details does not automatically make them the fault party.

The MIB will still need to investigate to see who was at fault for the accident before they can award compensation. So the onus will be on you to prove using evidence who you think is at fault for the incident.

You can approach a claim with them independently or with the help of a personal injury lawyer. Call the number at the top of this page for help with this.

An uninsured driver is in breach of the law. When you are hit by a driver who turns out to be uninsured, it is still important to obtain their registration details. An accident that involves an uninsured driver should be reported to the police. Once again, the MIB may be able to cover your damages if it is proven that you are not the fault party.

Who Could Make A Hit And Run Compensation Claim?

Hit and run compensation can be claimed by any of the following parties:

Collisions and road traffic accidents are common, with government statistics pointing out that by the year ending June 2021, an estimated 24,530 people were killed or seriously injured on Great Britain’s roads.

Under the guidance in the Highway Code, all road users must adhere to the standards of skill and care of the average motorist and failure to do so could make the other party liable if they injure you. It’s important to note that failing to stop after an accident could be considered a separate offence.

There is a distinction between careless driving and dangerous driving:

Careless driving is outlined in section 3 of the Road Traffic Act 1988 as driving in a way that falls short of the expected standards. This could include:

Furthermore, section 2 of the Road Traffic Act 1988, dangerous driving is defined as driving in a way that falls far below the expected standards of a competent and careful driver. Such as:

After a road traffic accident of any kind, medical evidence is required as the starting point for calculating damages. Hit and run compensation is evaluated like other personal injury claims by sitting for an independent medical assessment with a GP or specialist.

Their examination will produce a report that details exactly the extent of your injuries as well as long term prognosis and risk of future problems. It can also clarify or rule out other health conditions.

The details of your injuries can be compared with those listed in an index of award brackets called the Judicial College Guidelines. This publication does not provide guaranteed amounts but it does aim to offer a guide for the appropriate level of physical or emotional damages to request. The figures aim to acknowledge:

Below is an excerpt from the Judicial College Guidelines showing some of the award amounts that may be applicable:

In addition to general damages, you may be eligible for hit and run compensation that covers other losses. After an accident such as this, there could be a wide array of unforeseen and additional costs that you need to meet as you adjust afterwards. With the correct documentation to prove these losses, it may be possible to request reimbursement for:

It’s important to note that you would need to have documents such as receipts, invoices or statements that prove these out-of-pocket expenses. Hit and run compensation claims should also include all the forecasted costs that may arise in the future. As it is possible to make only one claim, it’s essential to include a realistic and accurate request for all the potential costs to you. A personal injury lawyer can help with this.

Since May 2021, there is a new way of processing whiplash and soft tissue injury claims for adults in vehicles. The Official Injury Claim service (OIC) is a governmental portal that now processes all injuries valued at £5,000 or under. This does not apply when claiming through the MIB.

Talk To Us About Hit And Run Compensation

If you need to start a claim for hit and run compensation, a personal injury lawyer acting under a No Win No Fee agreement could help. Also known as ‘Conditional Fee Agreements’ this can be a way to hire a solicitor with no upfront payment. There are no fees to pay as the case goes forward. If the case fails, you have nothing to pay your solicitors.

When a hit and run compensation claim succeeds, an amount of no more than 25% is due to your solicitors. This is known as a ‘success fee’ and is paid after the solicitor receives the settlement. With this in mind, a No Win No Fee agreement enables claimants to access legal representation quickly and easily.

Find out more by contacting our team. We can help you connect with a No Win No Fee solicitor now. Ensure your hit and run compensation claim starts correctly by:

As well as hit and run compensation information, below are further resources to help with other types of personal injury claims.